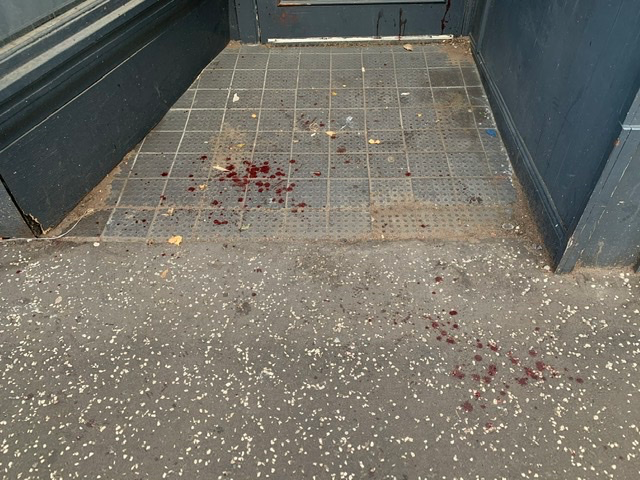 Five years ago today, i left America, where i had lived since 1995, and returned to Scotland. But the process of leaving America started decades before i lived there.

It was a Saturday night in Glasgow, Scotland. Clarendon Street is at the bottom end of the Maryhill area, so residents in denial would say they lived in Woodside. It was 1977, so I was 11 years old. I was walking past a block of flats, and i heard something that made me open the entry door and look into the stairwell.

Three or four young men had another man in a corner, and they were kicking him and slashing at him with knives.

They did not seem to realise I was there, but when I ran out of the building, i think they heard the door slam shut, and that made them decide to get out of there, because they emerged close behind me, but they were not chasing me. They did not even look at me; they looked at one another, laughing, and then they walked away, their demeanour no different than if they had just left a bar or club.

I went back into the building. The man they had attacked was still slumped against the wall, blood dripping from the gashes on his face and making little pools on the concrete floor.

He lived with his mother in a flat in the building. He had spent the afternoon and early evening with friends on a pub crawl, and these strangers had attacked him as he entered his building.

Young as i was, the scene was not as frightening as others i would witness later. As the man sat on the couch in his living room and told two cops what had happened, his mother and another woman, a neighbour, sat on either side of him, cleaning the cuts on his face, waiting for the ambulance the cops had radioed for. What i still remember most vividly is not the hurt that was done to him, but the laughing faces of the men who had hurt him — how ordinary, how normal, it had seemed for them. But the sound of the police radios, and the angry tears of the mother, and the arrival of the ambulance, reassured me that it was not.

I remember a woman, twenty years old. Her fiancé was a missionary, and he left the country for a while. During his absence, she had sex with one of her co-workers and became pregnant, but she still wanted to be with her fiancé, so she told the other man it was over, told him to leave her alone. He brought a gun to work and used it to kill her as she walked to her car. Members of his family talked about how much he loved her, how the unborn child was everything to him.

People would ask me how i could be around such awfulness and still live a happy life. I tried, and usually failed, to explain that the lights of police cars, and the yellow crime scene tape, and the very fact that i was there because it was newsworthy, served as a reminder that what i was seeing was wrong, madness, an aberration. Even when brutal crimes were committed by the police, the fact that they tried to conceal what they had done showed that it was not part of the normal world, the realm of the sane.

I had been sickened, horrified or heartbroken by crime scenes, but the first time i felt frightened by one was in 1998, at a crime scene where nothing illegal happened.

It was around midnight at the state prison in Florence, Arizona. I was there to witness the killing of Jose Ceja, who had been on death row for 23 years, for a double murder he had committed when he was 18. At his clemency hearing earlier in the day, the judge who had sentenced him to death now testified on his behalf. The judge, Mel McDonald, said Ceja had not had a fair trial, and that he would not have sentenced him to death if he had known all the facts. He praised Ceja for educating himself while in prison, and said that to kill him after 23 years would be cruel and unusual.

The clemency board voted to kill Ceja anyway.

When the curtain opened, Ceja looked like a man tucked cosily in bed. Because of the sheet that was tucked around him, and the strategic positioning of the gurney he was strapped to, i could not see the needles and catheters that were stuck in his veins. Robust and healthy-looking, he could have been waiting for someone to bring him a cup of coffee. He looked at his lawyer, smiled and winked at him.

They injected him with thiopental sodium, a short-acting sedative. Then pancuronium, which paralysed every voluntary muscle in his body, so that, no matter how much pain he might have been in, he could not show it. Then they stopped his heart with a dose of potassium chloride.

This is how it looked: His breathing got fast, and his eyes closed. His face went into spasm, as though there was an explosion just under his skin. His upper lip trembled and then billowed out from his face, like a rag flapping in a strong wind. After some minutes, it stopped.

Immediately afterwards, outside, i saw another of the witnesses, Maricopa County Attorney Rick Romley, chatting with officials, laughing.

It was the same madness i had seen at crime scenes, but this was terrifying, because it was the state, the people, the sane ones, deliberately killing an unarmed man. And the laughter of Rick Romley was the same as the laughter of the men in Glasgow who had cut the face of a stranger for no reason other than that they wanted to. And i realised the border between the realms of sanity and madness, civilisation and barbarism, existed only in my mind.

Others did not believe me. Two years later, i saw the optimism of the legal team who were trying to stop another execution in the same prison. Their case was strong. They were arguing that their client, Michael Poland, was mentally incompetent to be executed – and, as the state’s own psychiatrist agreed, the lawyers were shocked when Judge James E. Don ordered the execution to go ahead anyway.

I was not shocked, or even surprised, for the same reason i was not surprised a decade and a half later, when Donald Trump became President.

I knew what was going on with my friends, because i had seen it before, at another crime scene.

It was at a party during a book festival. One of the authors was owed money by his publisher, an upper class trust funder. The author was clinically depressed, and the publisher openly taunted him in front of other people at the party.

The author had a friend with him, a man who was less genteel than those who usually attend literary events. This friend was so irked by the publisher's meanness that he threatened him with violence.

The publisher was not intimidated, because he lived in a world where he felt safe. He sneered at the author's friend.

I remember the publisher was wearing a hat with a wide brim, because i can still see the hat falling off when the author's friend hit the publisher with a backhanded slap to the face. But what is clearest in my memory is how the publisher reacted...

Unable to accept what was happening to him, having no idea what to do about it, he went completely into denial. As if his hat had fallen off by accident, he bent, picked it up, and put it back on. The other man hit him again, twice, with each side of an open hand. Again the hat fell off, and again its owner picked it up and replaced it on his head, not acknowledging the man who was hitting him. It was a reality he had no mental/emotional vocabulary to handle, so he pretended it was not happening, as though acting as if everything were normal could make it so. Before the beating could continue, other people at the party intervened. The publisher left, hat on head, body trembling.

During the presidential campaign, i saw my friends do what that publisher had done. Frightened, vulnerable in ways they had never imagined possible for them, they denied reality. While unable to deny that there was madness, they took refuge in a fiction that there was a realm of the mad, and that its denizens were the distant subjugates of the sane, the rational, the normal.

Then the election result was announced, and the hat was knocked off the frightened head.

I had lived in the US for nearly 22 years, and in that time i had never once gone back to Scotland for a visit. But, as the blow landed and the hat fell, i saw i was living in a crime scene, so i did the only rational thing: i fled. In February 2017, i moved back to Glasgow.

When asked how i could leave the US after so long, i answer that the US left me. This is glib, but it is also true. I looked at the US, and i saw the laughing thugs outside the building where they had cut a man's face, the laughing county attorney outside the death house. Any pretence of sanity or decency had been abandoned.