Love in a Colonised Country 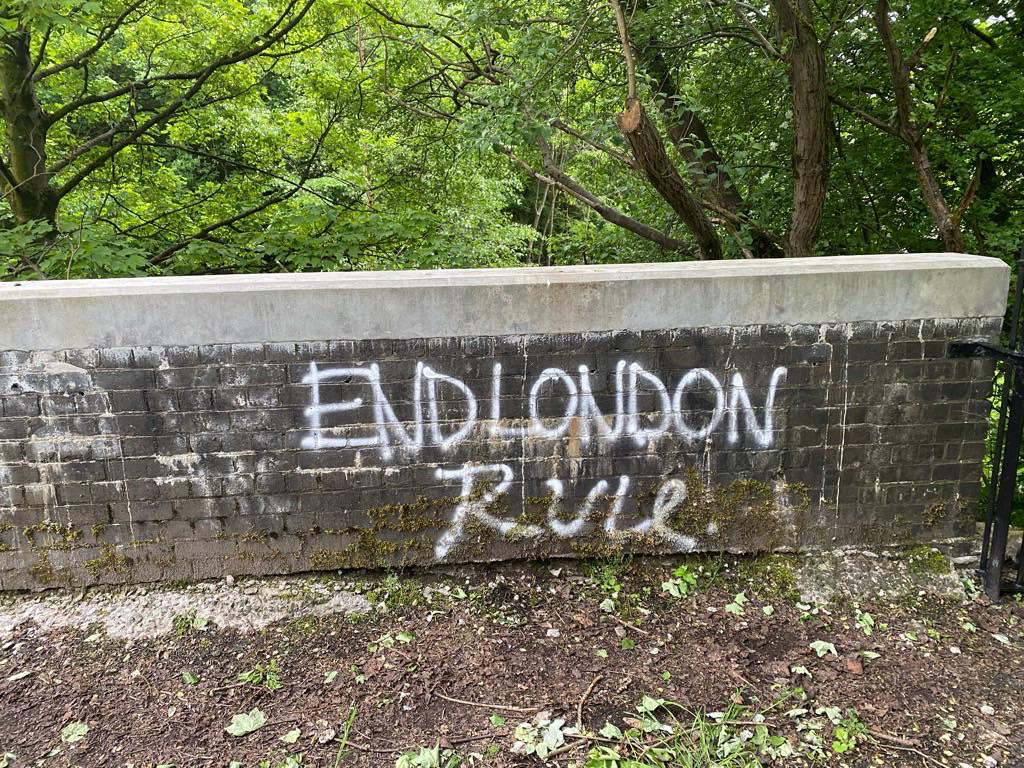 I am a British citizen, though i now resent that status. I was born and grew up in Glasgow, travelled widely, and once again live in Glasgow. But the government of the country that colonises Scotland refused to allow me to marry in my own country.

Daishin, my wife, is American. We have been a committed couple for 11 years, living together in America for most of that time. In 2017, she visited me in Glasgow three times, a few weeks at a time, amounting to slightly less than six months of that year. American citizens are allowed to spend six months of a calendar year in the UK without a visa.

In March 2018, daishin came for her first visit of the year. Border Force detained her at Glasgow airport, searched her luggage, read her journal, looked at her phone, kept her in a room all day, and accused her of living here part-time. When they called me (the person refused to tell me his name) and i confirmed she was my partner, they told me they considered the frequency of her visits to be an "abuse" of the regulations, but did not explain how. That was a Wednesday; late in the afternoon, they told her she would have to leave on Saturday, and they kept her passport. We had two days and one evening together before she had to leave.

In the next few months, we talked by video or text every day, and considered moving to another country to be together, as i was unwilling to live in the US, and daishin said she considered home to be wherever i was. The harshness of our separation was made worse when i experienced a serious illness that required hospitalisation. When i recovered, we decided she would apply for a visa to be allowed to come to Glasgow and marry me.

I went to the Glasgow registry office to book the wedding for August 22, 2019. No problem.

Daishin applied for a fiancee visa, and showed copies of the wedding paperwork. On June 23, her visa application was denied on the grounds that she had not shown proof that she intended to leave, or that i could financially support her during the time she would be here – even though there was no request for my financial details on the application form, and they did not contact me at all, and daishin had shown that she had £29,000 in savings. Her savings alone, or my salary alone (£24,000 a year) would have been more than enough for us to live on for the six months the fiancee visa would cover.

They further stated that they were suspicious because she had previously listed her occupation as "photographer' and was now listing it as "clergy." The reason for the change is simple: daishin, like me, is a Zen Buddhist monk, and for more than a year had been ministering to homeless people in Seattle full-time, so had not been working as a photographer.

Daishin and i emailed a registry office in Reykjavik, Iceland, and were told we were welcome to get married there. When we met up there at the end of August 2019, it had been a year and five months, a cruel separation that now made us determined not to be separated again. After ten blissful days in Reykjavik, as we prepared to fly to Glasgow together, we decided that if Border Force did not let her in, we would go back to Iceland together.

Lying awake on our last night in Reykjavik, it struck me that we were among the most fortunate of those abused by the Home Office; we own devices that let us stay in contact every day, we both speak English as a first language, neither of us has a boss, and the work we do can be done from anywhere that has an Internet connection. Even though it would be tough financially, we could probably survive in a country even as expensive as Iceland. But if a couple as privileged as us could be denied a life in my country, how much worse it must be for those with fewer resources.

You can imagine how apprehensive we were as the plane landed at Glasgow airport. At customs, when i showed my passport to the machine, the barrier opened. When daishin showed it her passport, a message appeared on the screen telling her to seek assistance.

I stood waiting on the other side for perhaps a half-hour, until a man in a uniform approached, asked me if i was me, and asked to see our marriage certificate. I was relieved that he was as friendly as the one we had dealt with in 2018 had been belligerent, but it was an interrogation nonetheless. He kept repeating that daishin could not legally live with me in Scotland, and asking what our plans were – and i told him, truthfully, we did not yet know where we were going to live. I suspect it helped that, to be on the safe side, daishin had booked only a short visit to Scotland, and was able to show a return ticket to America for three weeks hence. The man let her in.

She has been here longer than three weeks, because we quickly hired an immigration lawyer, and the preparation for her application for a visa that will let her stay here with me involves in-person meetings. She is here legally; the allowed six months runs out on March 7. And she will have to leave by then, because when she applies for her visa, she will have to make the application in America. She is not allowed to be in the UK when she applies. Why? Because.

And this is the most reprehensible thing about the Home Office's policies: they are not just ruthless, they are cruel. Ruthlessness is at least rational, as it involves hurting people in order to gain something. But the Home Office is causing harm with nothing to gain. How does it benefit from forcing daishin to go back to America for the eight weeks her visa application will take? What damage did they think she had done in 2017 by coming here, breathing air, occupying physical space and spending money?

And note that i say "they," not "we." Because it is England, not Scotland, that is stopping me from being with my wife for another indefinite period.

Patrick Grady, the MP for Glasgow North, agrees. "Scotland needs an immigration policy suited to our specific circumstances and needs," he told me last year. "We need people to want to come to work, live and study here and to contribute to our society.

"Time and time again we are seeing people being denied entry or leave to remain in the UK because of the Home Office's strict and arbitrary immigration rules.

"It's clear the UK Government's hostile environment approach is failing Scotland, which is why the SNP continues to call for the devolution of immigration powers so that we can create an immigration policy that benefits our economy and society, and one that treats people with dignity and respect."

So, as we prepare for daishin to leave in just over two weeks, i feel as Scottish as i always have, but no more British than she is.