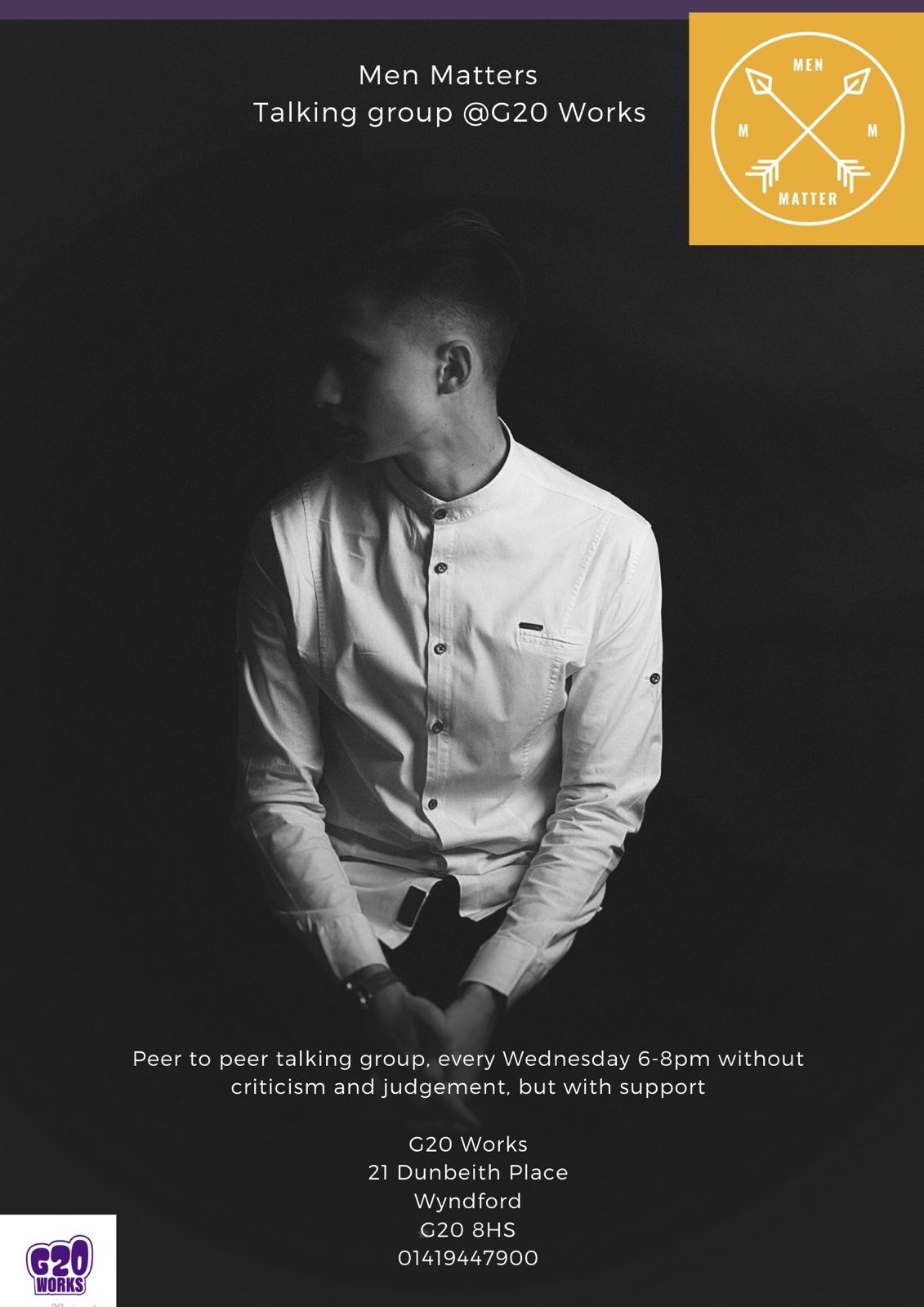 [photo caption: POSTER FOR MEN'S GROUP. Black and white picture of a man in a white shirt with his face partly in shadow, and the words: Men Matters Peer to Peer Talking Group, every Wednesday, 6-8 pm, without criticism and judgment, but with support. G20 Works, 21 Dunbeith Place, Wyndford, Glasgow G20 8HS. 0141 944 7900

Yesterday, i attended this meeting, and i intend to be a regular. It is so good to have such a group in the Wyndford. There is also a meeting for women on Tuesdays. 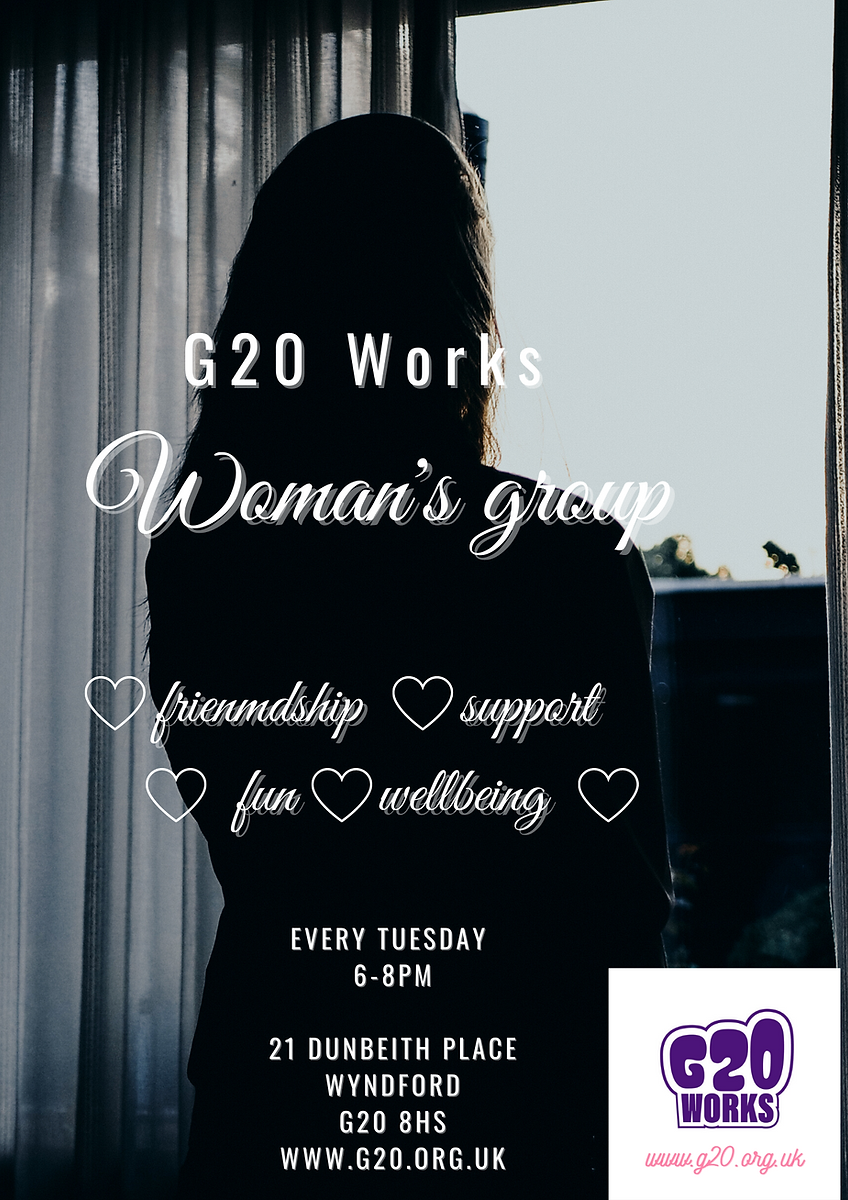 The Philosophy of Modern Song by Bob Dylan

laughing at the clock by aonghas macneachail

There's a Witch in the Word Machine by Jenni Fagan

Random Luck in a Crisis

Happy New Year. For daishin and me, personally, it is, but not because of any virtue of our own, just luck. As i write these words, the temperature outside is below freezing, but our home is warm, even though we have not turned on the heat even once this winter. This flat, where we have lived since last May, is so well-insulated, and with several floors of neighbours below, that even in cold weather we are sometimes so warm we have to take off a layer of clothing, or turn back the duvet on our bed.

We have enough food. Neither of us is ill.

And, in this historical moment, the above means we are extraordinarily lucky.

We have friends and neighbours whose homes are freezing, and they cannot afford to heat them. People are having to choose between heating or eating. It is difficult to go out and find a warm public place if you cannot afford to wash your clothes.

In a Glasgow hospital, people have to wait for other people to die before they can get a bed.

In Glasgow, even if you are in your 80s and having a stroke, you cannot get an ambulance.

More than a third of adults in the UK would struggle to find an extra £20.

We are told that we are "post-Covid," no safety regulations are in place, and yet the "twindemic" is so severe that ambulances are rationing oxygen.

While grateful for our luck, daishin and i are sad and angry, because, for most of our society, luck is now all we can hope for.

The Go-Between by LP Hartley

Through Forests of Every Colour by Joan Sutherland

The Collected Works of Billy the Kid by Michael Ondaatje (reread)

Why Is the Hacking of 400 Million Twttr Users' Private Information Being Ignored By Most Media?

I am baffled and fascinated by the lack of media coverage of the Twttr hack in which 400 million users – including Alexandria Ocasio-Cortez, Piers Morgan, Donald Trump Jr, Scott Morrison, Steve Wozniak, Brian Krebs, Neal deGrasse Tyson, Cara Delevingne and Mark Cuban – had their data compromised.

I have seen some of the raw data, which contains the personal email addresses and handles of the people named above.

The hack was announced on a forum on December 23. It said:

December 23, 2022, 01:35 PM (This post was last modified: December 27, 2022, 03:28 PM by Ryushi.) Hello dear breached users I'm selling data of +400 million unique twitter users that was scraped via a vulnerability, this data is completely private And it includes emails and phone numbers of celebrities, politicians, companies, normal users, and a lot of OG and special usernames.

Twitter or Elon Musk if you are reading this you are already risking a GDPR fine over 5.4m breach imaging the fine of 400m users breach source I will advice you, Your best option to avoid paying $276 million USD in GDPR breach fines like facebook did (due to 533m users being scraped) is to buy this data exclusively, Which can go through the official owner middle man on here @pompompurin or admin @Baphomet after that I will delete this thread and will not sell this data again. And data will not be sold to anyone else which will prevent a lot of celebrities and politicians from Phishing, Crypto scams, Sim swapping, Doxxing and other things that will make your users Lose trust in you as a company and thus stunt the current growth and hype that you are having also just imagine famous content creators and influencers getting hacked on twitter that will for sure Make them ghost the platform and ruin your dream of twitter video sharing platform for content creators, also since you Made the mistake of changing twitter policy that got an immense backlash From content creators this is a sensitive time, which will make things far worse and if you are unsure just run a poll on twitter like usual and people will choose their fate, because at the end of the Day it's the company's fault that this data was breached.

I heard about it from a reliable source on December 25, who wrote: "dude, donnie jr uses hotmail. i find it fucking amusing that brian krebs uses gmail."

But there was so little reportage about it that i almost doubted it could be true. Wired magazine said nothing. Ditto Ars Technica and the New York Times. The Guardian made no mention of it until December 28 – and that was in the paper's Australian section, which apparently deemed it newsworthy because the country's former Prime Minister was one of the 400 million.

But, a week after it happened, most mainstream media are still silent about it.

The Strange Case of the Disappearing Buddha 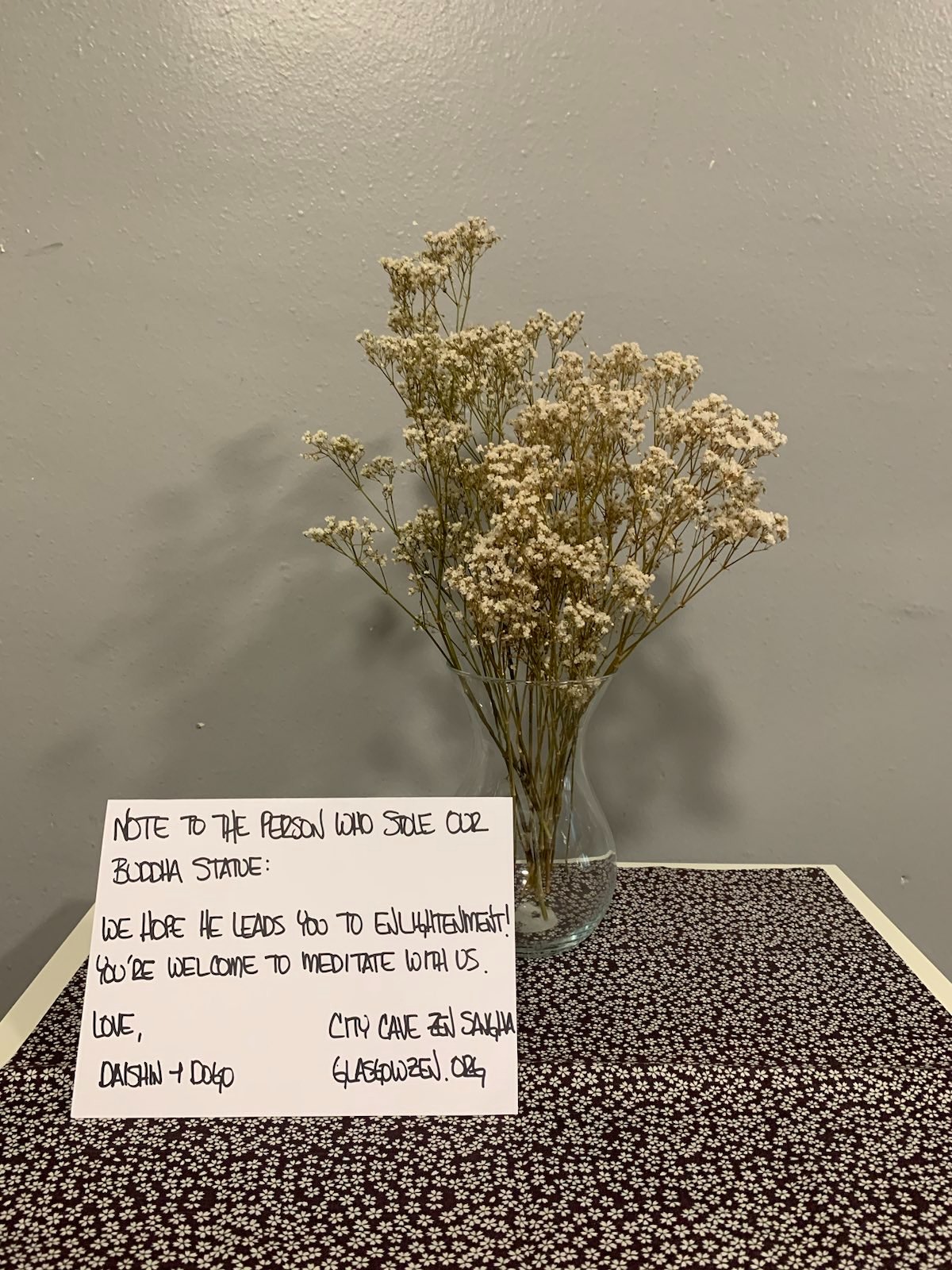 Today, as i was heading out for a walk, i started to bow to the Buddha statue that sat on the little table outside the door of our flat along with a vase of flowers... but the statue was not there. I called to daishin, who came outside, and we both burst out laughing.

It is not the first time this has happened.

In the first decade of this century, i had a Buddha statue that sat outside the front door of each of the different places i lived in for a few years. In 2007, in Phoenix, Arizona, i got home one night, and it was gone.

My first reaction was to laugh, and then to feel a strange affection for the thief. Who was it? The tweaker neighbour? One of his many friends who came and went? And why the Buddha? Why not one of the porch ornaments from the people who lived downstairs? Did the person steal the statue because they were drawn to the image, or because they thought they could sell it (good luck; it was not expensive)? Though there was a certain annoyance, i could not help but feel glad that someone wanted it, whatever the reason, and i wished good things for whoever it ended up with.

As i stood looking at the spot next to the door where the statue had been, the tweaker neighbour emerged from the darkness behind me, shirtless.

"Have you seen the Buddha statue i had sitting here?"

I just looked at him and smiled and did not say anything. He twitched back into the hot darkness.

I looked at the empty spot by my door again, bowed to it, and went into my apartment.

Then and now, a thief took a statue from outside our door, but the Buddha is still there. He is the empty space. He is tweaking in a desert city 15 years ago, he is now somewhere in the Wyndford with a stolen soapstone statue, he is typing these words, and he is reading them through your eyes.